“I’m so glad that the Foothills Land Conservancy and I worked together to place a conservation easement on this land–known as the Bluff Mountain Ecological Reserve. This agreement enables continuation of the conservation principles my Father, Mother, and I have tried to practice on Bluff Mountain. Hopefully, many others will see fit to do their part to save God’s beautiful Creation.” – Marian Oates 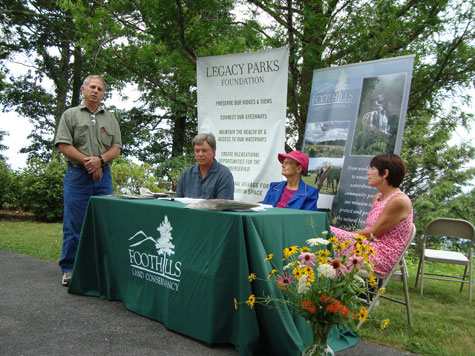 On Wednesday, June 24th, 2009,  Marian Oates celebrated her birthday and a few days later, her love of the land, with a donated conservation easement signing on her property. Now 510 acres of ridge tops and mountainsides will be protected in the counties of Sevier and Blount.

Conservation easement agreements are one of the most popular preservation methods for land owners. It is a legal contract between a landowner and a land trust that describes activities that may take place on a property in order to protect the land’s conservation values. Landowners continue to own, use and live on the land. A conservation easement protects property from being developed and owners can always sell, lease, or donate their property.

Foothills Land Conservancy regrets to mention that Marian Oates passed away in July 2009. 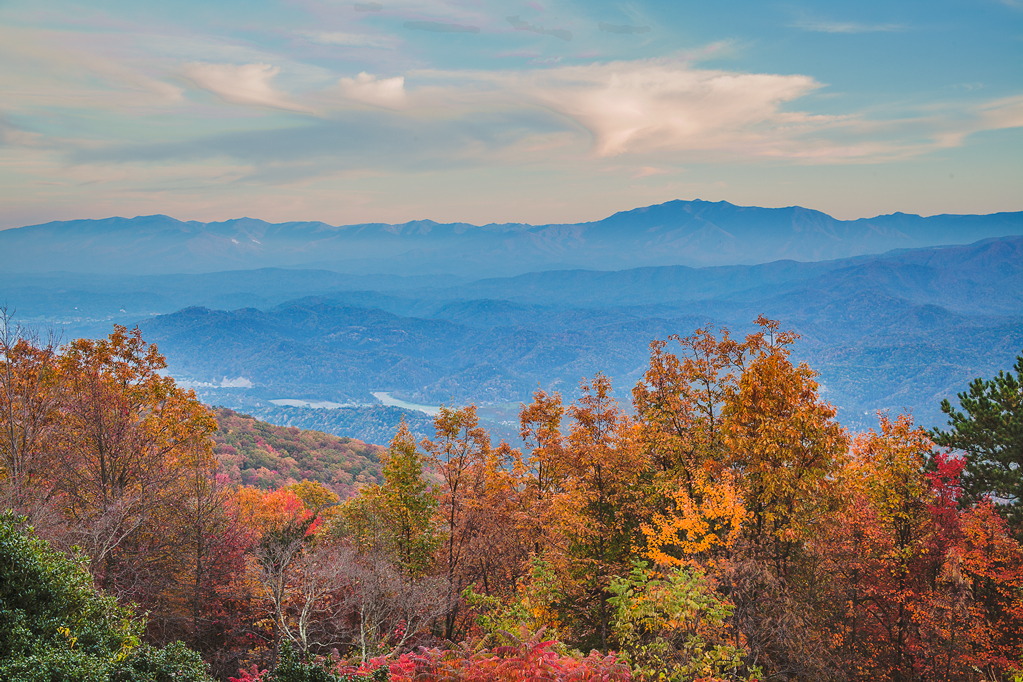 Image taken from atop Bluff Mountain, with a view of the Great Smoky Mountains National Park. Photo courtesy of Mike Naney.

FLC’s Executive Director, Bill Clabough, says that with these types of land protection projects, “You realize it’s not just the vast landscape that can capture the essence of East Tennessee’s diversity, it’s also the people that leave imprints just as poignant. So is the case of Marian E. Oates and her family their patience, foresight, and love of the land over the years will now ensure that the acreage on Bluff Mountain will forever be protected from commercial development and mining practices. He adds, “It’s the ultimate gift a family or individual can give – to allow for the land to stay as is, uninterrupted and in perpetuity  it’s just very special and benefits everybody.”

From atop the east side of Bluff Mountain pictures of civilization emerge from below the twists of roads cut into the hills and building rooftops that reflect the shining sun. To the west, a different story emerges  a window into the Great Smoky Mountains National Park with cascading views of Cove Mountain, Clingmans Dome, and the majestic Mount LeConte. Oates often noted the rising and setting suns placement among these mountains ridgelines and could even tell you where they fall for the summer and winter solstices. 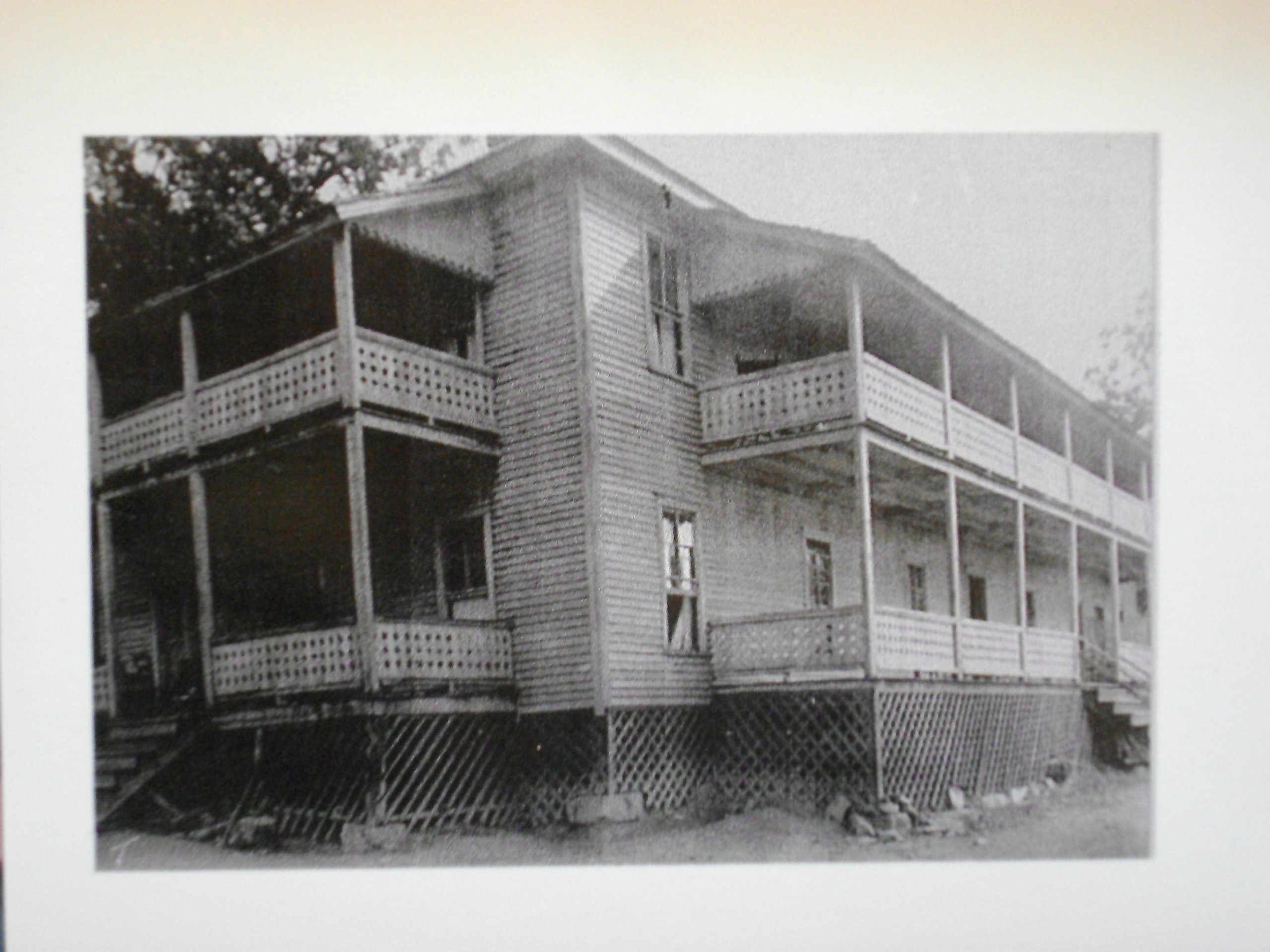 Image of the Dupont Springs Cool Chilhowee Health Resort, a former hotel located up at the top of Bluff Mountain and once a favorite vacation spot enjoyed by Marian and her extended family.

Marian could also point out the former location of her family’s old cabin and the long fallen hotel, once a favorite vacation spot for her grandparents back in the early 1900’s. Called the Dupont Springs Cool Chilhowee Health Resort, it touted the water as having strong mineral properties that contained iron, lithia, and magnesia. It’s this very hotel that inspired her grandparents and their son Frank, to consider the mountain as a permanent holiday spot. Over the next few years Frank developed a land acquisition plan to buy up tracts, gradually building up the necessary road systems. In early 1950’s Marian’s father then purchased the very top of Bluff Mountain for $10,000 and with a bit of patience and much excitement he and his wife, Emma Ree Crooks Oates, built their dream retirement home in 1964.

Ms. Oates retired after serving as the CEO/Executive Director of the Girl Scouts of Tansai Council, Inc. in Knoxville, Tennessee. Prior to this position she worked for the City of Oak Ridge as a Data Processor and as a Secondary School Teacher (Mathematics, Chemistry, Physical Education) with Atlanta Public Schools in Atlanta, Georgia. Ms. Oates serves as a board member for the East Tennessee Foundation and FLC and is also President of Upper Bluff Mountain Associates. She served as past chair of the Great Smoky Mountains Association, past national board officer for the Association for Partners for Public Lands, and is a 50+ year member of the Smoky Mountains Hiking Club. Ms. Oates holds a B.S. in Chemistry and a Masters of Mathematics from the University of Tennessee in Knoxville.

Back to Main Page