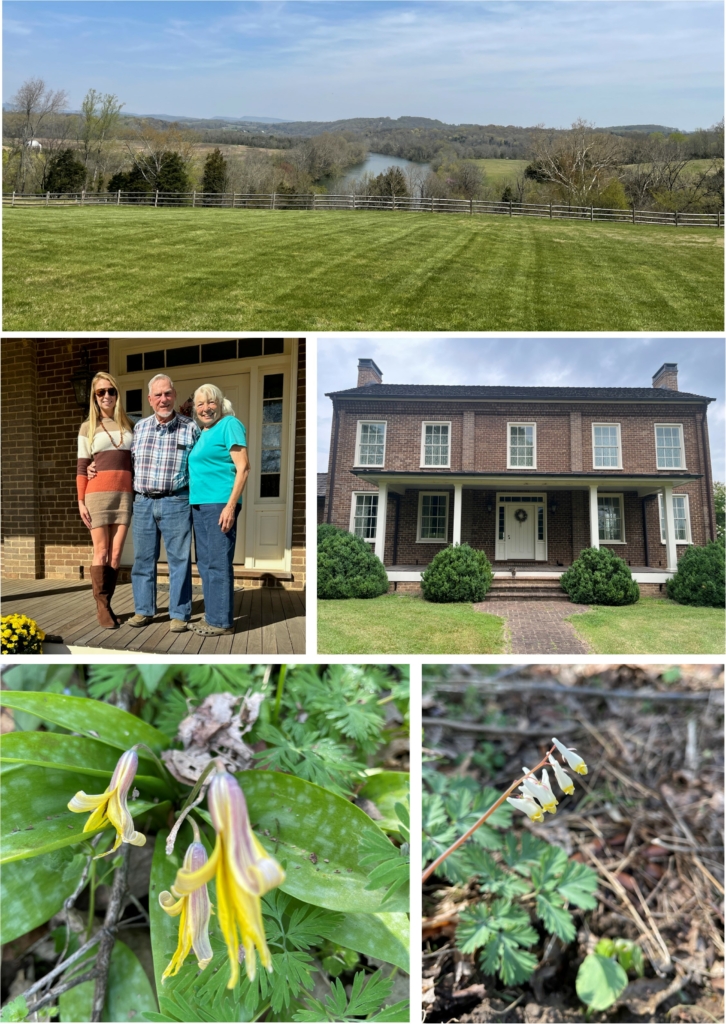 STRAWBERRY PLAINS, TENNESSEE—”Can you see the Sleeping Lady?” We are standing on the back porch of the historic Isaac McBee House, built in 1850, and I follow Jack Kramer’s gaze across the back lawn, over McBee Island flanked by the cold March waters of the Holston River, to the mountains in the distance.  “She’s easier to see this time of year,” he says, because those distant hills are unobscured by the foliage of trees still nakedly waiting for spring.  Indeed, I can see her—she lies with her head to the west and her toes stretched out to the east, the hills forming the rise and fall of her body.

This porch, and the other accoutrements that fill the Isaac McBee house, are the centerpiece of this 121-acre farm in Jefferson County, Tennessee, but this is not the only treasure to be found here.  A short walk along a gravel road through the farm finds me between the river bottom pastures and a steep rocky slope, and it happens to be the perfect time of year for the latter to become adorned in the ephemeral wildflowers that signal that winter is loosening its grip on the landscape.  Dutchman’s breeches, yellow trout lilies, trilliums, wild blue phlox, and twinleaf have exploded from the leaf litter, and if it were not for the ambient mooing of cattle, I would think I had stumbled into a rich mountain forest.  Agriculture is certainly of conservation importance, and Foothills Land Conservancy has worked to preserve many acres of farmland, but this pocket of biodiversity is a surprising treat.

This crisp morning was my first time meeting the Kramers, Jack and Beverly, who chose to settle in Strawberry Plains after leaving their native Pennsylvania.  Conservation-minded and unfailingly pleasant to be around, I would visit them several more times before we finally signed the conservation easement that will forever protect this place in which they have invested so much of their lives.

Farmland in this area is increasingly being converted to residential development, and it reminds the Kramers of similar changes in land use back home.  The peace of mind afforded by the permanency of the easement, coupled with Jack’s experience as a board member of French and Pickering Conservation Trust, were among the reasons that the Kramers chose to partner with FLC.  Over the years, the Kramers have hosted friends and family for gatherings, parties, and traditional fox hunts.  The views from their home are spectacular—Executive Director Bill Clabough noted on our first visit that this property would be a “jewel” and it absolutely is.  The Sleeping Lady can rest peacefully in the knowledge that, at least on this side of the river, her slumber will remain undisturbed.