“During my 12 years at FLC I have never experienced such a large, natural area being donated directly to the Conservancy and so unexpectedly. It was one of those rare moments that will always be a highlight for me during my career at Foothills.” – Bill Clabough, FLC’s Executive Director

On a chilly day back in February of 2017 FLC’s Executive Director, Bill Clabough, spoke to an audience at Asbury Place, a retirement community in Blount County, TN. The group wanted to hear all about Foothills and questions arose such as, “What does FLC do exactly? Where are some of the preserved properties located and what are they like?” One gentleman in the front row seemed to have a particular interest in land preservation. His name is Don Fourman and, unbeknownst to the Conservancy, he had quite a large preservation project of his own in mind.

Mr. Fourman owned close to 1,000 acres of natural lands in Roane County a beautiful property with creeks, woodlands, scenic views along with a unique history and he had been considering how best to preserve this property for future generations. One of the tract’s borders adjoins the 11,000 acre Mount Roosevelt State Wildlife Management Area (WMA). After a few initial conversations with the Conservancy, along with staff and Board site visits, Don Fourman deeded the property to FLC in March of 2017.

The Conservancy is excited to announce that this tract now has an FLC conservation easement on it and has been conveyed to the State of Tennessee’s Wildlife Resources Agency (TWRA). TWRA plans to manage and steward the property as part of the Mount Roosevelt State WMA.

Click here to learn more about FLC’s other 2017 land projects!

The Fourman property now joins the 100,000 cumulative acres FLC has been a part of protecting – across 35 Tennessee Counties and the 6 additional states of Alabama, Georgia, Kentucky, North Carolina, South Carolina and Virginia.

Foothills appreciates any and all gifts given to the Conservancy
no tract of land or monetary donation is too small or too large!

EVERY GIFT MAKES A DIFFERENCE!

Your donation assists FLC with protecting lands, like Don Fourman’s, all over the Southeast!

or click here to print and mail this form along with contribution. 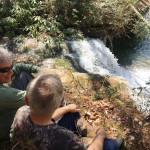 At left, FLC Executive Director, Bill Clabough, looks out at the Fourman property with FLC Board Member, Billy Minser, during a site visit. 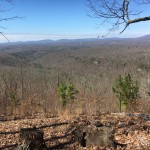 View from the north side of the property. The 1,000 acre Roane County tract is situated along the eastern edge of the Cumberland Plateau, also known as the Cumberland Escarpment. 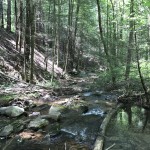 The property is being preserved by FLC for its scenic open space forest, escarpment outcrops, and the protection of the relatively natural habitat corridor for the terrestrial and aquatic wildlife and rich plant life it supports. It is within several recognized priority conservation areas including the Tennessee Wildlife Resources Agency (TWRA) State Wildlife Action Plan (SWAP). 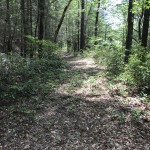 The richness of the region is attested to by the many nearby state-preserved lands managed for their biodiversity. Mount Roosevelt State WMA consists of 11,000 acres and adjoins the property along one side of the tract. Other natural areas located near the property include: White’s Creek Gorge (179 acres), Ozone Falls State Natural Area (SNA) (58 acres), Piney Falls SNA (449 acres), Stinging Fork Falls Pocket Wilderness (139 acres), and Luper Mountain WMA (1990 acres). In addition, other nearby private easements held or co-held by FLC include approximately 2,745 acres in Roane County alone. 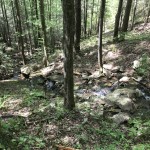 The general forest type for the region is Mixed Mesophytic, which is considered by a number of conservation organizations, such as The Nature Conservancy (TNC) and the World Wildlife Fund (WWF), to be one of the most biologically diverse temperate region forest types in the world. 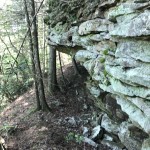 Image of a sandstone rock wall taken on the property. 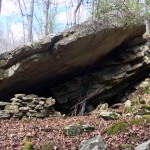 One of many interesting rock formations found on the property. 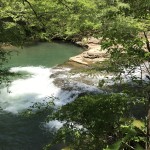 In 2017, FLC received a land donation of 1,000 acres in Roane County – a beautiful property with creeks, woodlands and scenic views. This is a staff photo of a spillway along Piney Creek. A portion of Piney Creek and White’s Creek are located inside the property boundaries and are considered a high priority conservation area by the TN State Wildlife Action Plan. Click here to read more about this land donation. 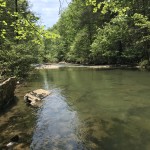 Another image of Piney Creek. The Loudon/Watts Bar HUC_8 watershed, in which the property lies, is ranked as a critical watershed for freshwater species. White’s Creek and Piney Creek, along with Rock Creek, a Piney Creek tributary, are rated as ‘fully supporting’ by TN Dept. of Environmental Conservation. The conservation area contains 13 aquatic threatened or endangered species including the Laurel Dace, Tangerine Darter, and Orangefoot Pimpleback. White’s Creek and Piney Creek are also considered suitable habitat for the Eastern Hellbender. The Hellbender is considered in need of management by the State of Tennessee. 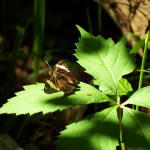 Eleven butterfly species were observed on the Property including this rare Golden-banded Skipper. This species is designated as rare and uncommon by the Tennessee Department of Environment & Conservation and may be upgraded to vulnerable due to declining populations. 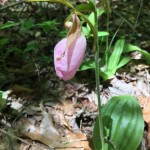 Image of a Pink Lady Slipper on the tract. A total of 238 vascular plant species were spotted during site visits, which included 29 canopy trees and 10 understory trees. 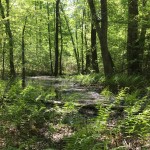 An imperiled Virginia Chain Fern wetland was spotted during a staff site visit. The FLC team determined the plant life to be very diverse. The understory was abundant with herbs and ferns. Dominant ferns that were spotted include: New York, hay-scented, lady, marginal wood, and cinnamon. Rarer species included the walking fern and royal fern. 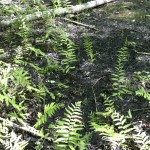 A close up image of the imperiled Virginia Chain Fern wetland. 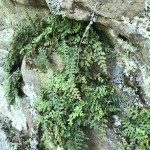 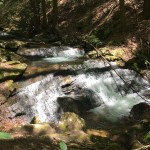 One of several small creeks on the property. 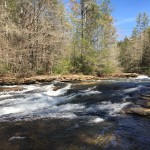 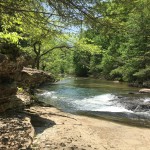 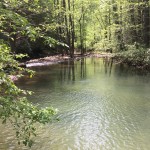