FLC Celebrates Another Record Year in 2018! 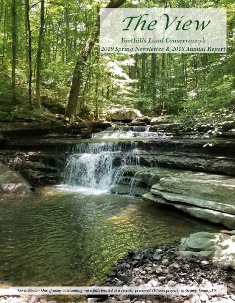 2018 was another record year for the Conservancy! Here are a few highlights: 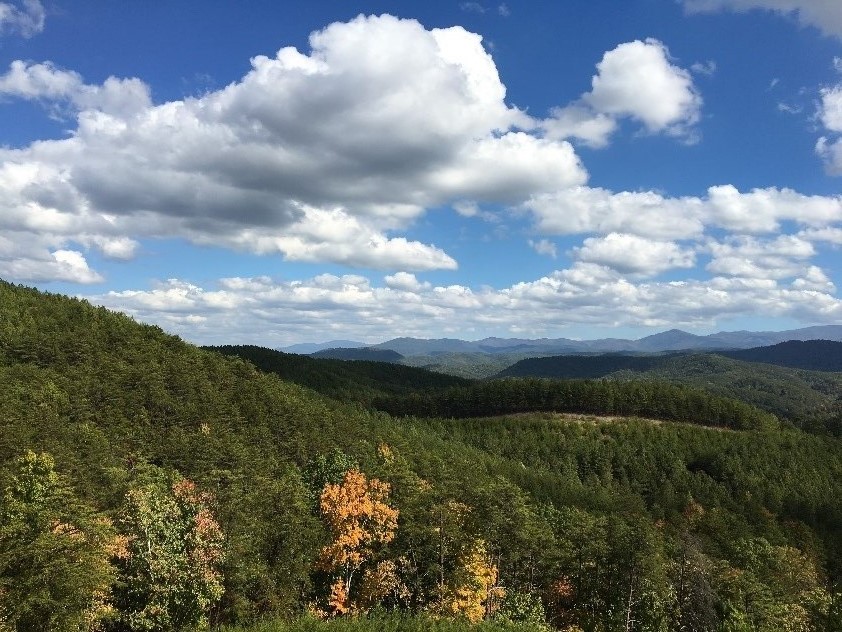 Looking out at the Cherokee National Forest from a recently preserved 972 acre property in Monroe County, TN

Here are a few of FLC’s 2018 projects. More descriptions and photos will be posted in the coming weeks. Click image to enlarge! 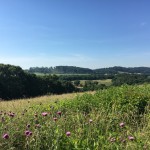 LOUDON COUNTY, TN (127 acres) – The property is being preserved for its open-space pastures, prime agricultural soils, the protection of relatively natural habitat for native plant and animal communities, and for its public benefit as an aesthetic buffer amid increasing residential, commercial, and industrial development. In addition, it serves an important ecological role as a buffer to several protected lands in the immediate area, including over 3,000 acres already protected by easements held by FLC within a 10 mile radius. 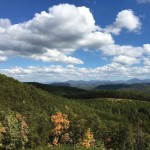 MONROE COUNTY, TN (972 acres) – The property is within approximately 1,500 feet of the boundary for the Cherokee National Forest. Approximately two-thirds of the slopes and ridges on the Property, many of which are forested, can be seen from Cherokee National Forest. The tract is also close to the Tellico Lake Wildlife Management Area, which includes over 8,700 acres, as well as The Nature Conservancy’s designated “Forest Block” of Joyce Kilmer/Unicoi Mountains/Slick Rock. These blocks represent large, contiguous un-fragmented forests in the southeastern region. The Property includes vast views to the surrounding Cane Creek and Ballplay Creek Valleys, Tellico River, the Blue Ridge Mountains and Cherokee National Forest. The central portion of the Property contains a large portion of Harlan Mountain, which includes Peaky Top, the highest point on the Property and one with spectacular views into the Cane Creek Valley to the south. The Cherohala Skyway, a National Scenic Byway that affords access from Tellico Plains, TN to Robbinsville, NC, lies only 10 miles away. 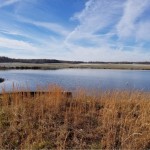 OVERTON/PUTNAM COUNTIES (1,067) – This property is in cropland and pasture on its south half, and oak forest and mesic forest on its north half. A 50 acre lake is situated on within the southern portion of the property while a creek and three tributaries flow north and northeast out of the property. The tract’s habitats support wintering and resident wildlife species including white-tailed deer, wild boar, ring-necked duck and sandhill crane, whose sign or presence were observed during an inventory of species in December 2018. Also spotted, a bald eagle that was observed hunting waterfowl over the lake. A manager of the farm says it is seen almost daily and occasionally with its mate. 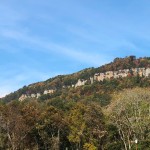 SEQUATCHIE COUNTY, TN (534 acres) – This property consists mostly of oak forest, mesic forest and pine plantation and stretches 2.25 miles above and below the Cumberland Escarpment, near Dunlap, TN. This tract is being preserved for its scenic ridgeline, which is presented to the public from the Sequatchie Valley below, as well as for its relatively natural habitat corridor for the wildlife, Neotropical breeding birds, and open space. 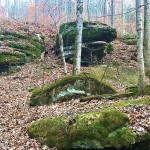 SUMNER COUNTY, TN (572 acres) – Roughly 25 miles northeast of Nashville, this property consists of forested ridges, limestone glades and rocky drains. Two intermittent streams drain the property directly to Station Camp Creek. This creek was assessed by the Tennessee Department of Environment and Conservation (TDEC) as having natural and scenic qualities of local significance, regional significance for recreational boating, and is considered an “Excellent” fishery. Station Camp Creek joins the Old Hickory Lake portion of the Cumberland River ten air miles to the south. A brief species list compiled during a staff site visit in November of 2018 included 43 tree species observed plus 82 other shrubs and herbs. Various signs and species of wildlife were observed during the site visit, including 14 species of birds, white-tailed deer (antler shed and rubs on small trees), eastern gray squirrels, and eastern chipmunks. A Belted Kingfisher was seen perching over one of the waterways on the property. 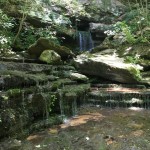 WARREN COUNTY, TN (308 acres) – This property includes ponds, waterfalls, and caves. The Collins River, designated as a ‘scenic river’ by the State of TN, runs along roughly 2,500 feet of the property. A portion of the tract includes pasture land and crop farming while close to 71 acres are in woodlands. Forested bluffs along the river support the most unique plant community found on the property-fire-adapted glade-type species that thrive in thin soil and exposed rock substrates and can tolerate extreme conditions. One such species, believed to be a very recently described species, was found on the steep limestone bluff above the Collins River on the south side of the property. This species is found only on the Cumberland Plateau and closely adjacent sections of the Eastern Highland Rim. 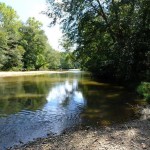 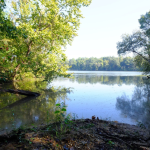 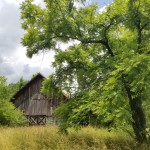 FLOYD COUNTY, GA (164 acres) – This property is located within several priority conservation areas and in close proximity to several protected areas. The tract includes a large pond with two streams merging on the western boundary. These streams form a creek which then flows into the Coosa River. The tract is also near several park systems like Martin Lake, Coosa Park, Johns Mountain Wildlife Management Area, Little River Canyon National Preserve, and Talladega National Forest. Two easements held by Foothills Land Conservancy totaling 1,309 acres are within 5 miles of the property. There are also 28 conservation easements held by another land conservancy within a 10 mile radius. 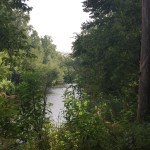 LUMPKIN COUNTY, GA (458 acres) – The forested property rises from the Chestatee River high onto steep slopes near Dahlonega, Georgia. The tract nearly adjoins another 721 acre FLC protected property with both lands connected by the Chestatee River (pictured). Another conservation easement protects more land along the river corridor within a few miles north. Protection of the land not only preserves the ecology of the area but also the public scenic views from both the river and surrounding vicinity. The easement will support maintaining the natural and rural character of the region that is well-known for tourism, scenery, and recreation. 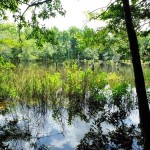 TAYLOR COUNTY, GA (360 acres) – This diverse property includes sandhills habitat, swamp, farmland, and seeps and also contains the state threatened Pickering’s morning-glory, a small white-flowered morning glory. This unique morning glory holds its small narrow leaves upright; fewer than 30 populations are known in the state, according to the Georgia Department of Natural Resources. The Property also contains the state rare Bachman’s Sparrow, which was heard on the Property because of its unique song. The tract lies within close proximity of already preserved private, state and federal lands, including: over 20 other private conservation easements, the Georgia Department of Natural Resources Wildlife Management Area (WMA), Chattahoochee Fall Line WMA, and Fort Benning. Protection of the Property will add to the mosaic of conserved land in the region. 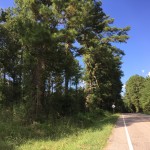 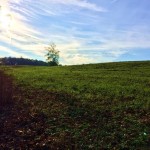 ANDERSON COUNTY, SC (95 acres) – A majority of this property is composed of farm fields, with small forested areas and a small creek. The farmland is currently being used for raising cattle. The property runs along a state highway that is part of the Savannah River Scenic Byway. Much of the land used to be pine plantation owned by a paper company. About 12 years ago it was converted to pasture. 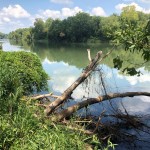 RICHLAND COUNTY, SC (114 acres) – This property is located along the Broad River (pictured), about ten miles from downtown Coumbia, SC. The tract consists of open agricultural fields and forested areas. The property’s forests are currently contiguous with those of nearby Harbison State Forest, making it highly likely that the wildlife species using those 2,000+ protected acres would benefit from the protection of the relatively natural habitat on the property as well. 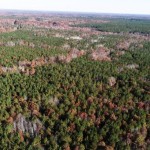 CHESTERFIELD COUNTY, VA (192 acres) – This property is adjoined by a 438-acre Virginia Department of Forestry Easement and a 207-acre conservation easement placed with Foothills Land Conservancy back in 2017. A 251-acre Virginia Department of Conservation and Recreation Easement occurs in close proximity. Easement restrictions will protect extensive wetlands and creeks that flow into the Chesapeake Bay Watershed. This reduces erosion and sedimentation and thus protects regional water quality. 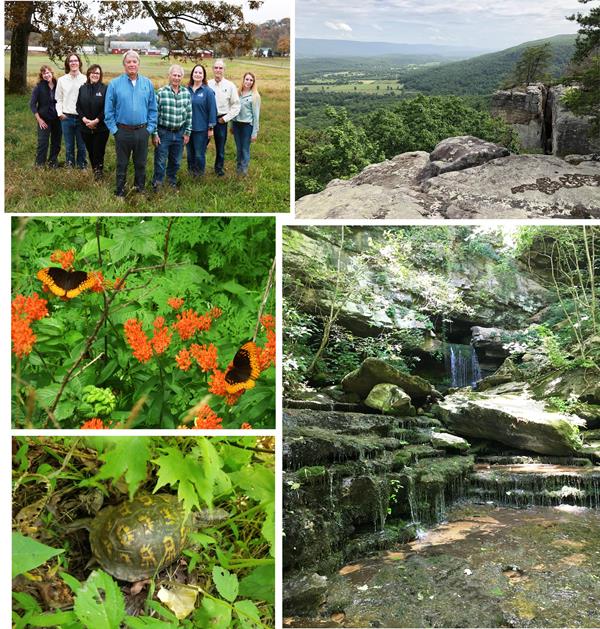 Click here to make a donation to Foothills Land Conservancy. FLC is dedicated to promoting, protecting and enhancing the lands and environments of the Southern Appalachian region and promoting the character of the land for the general public, now and in the future. FLC is a 501(c)(3) and does not receive any financial assistance from local, state or federal governments. We rely on individual and corporate contributions solely to sustain our organization, land acquisition and stewardship funds.